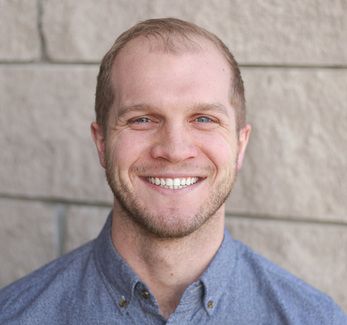 Dr. Alex Clark joined the Dental Arts team in July 2015. He grew up in Wichita, KS before moving to Kansas City to play soccer and attend college at Rockhurst University. During his time at Rockhurst, he met his wife Emily, and they were married in 2013. In May 2016, Emily graduated from the University of Kansas School of Medicine, and she is now in her residency in Obstetrics and Gynecology at UMKC. They have two cats, Myrtle and Luna, and in March 2018 their first child was born, a baby girl named Evelyn. They like to spend their free time traveling, going to concerts, trying new restaurants, and spending time with their friends and families.

Dr. Clark graduated from Rockhurst in 2011 and started dental school at UMKC later that year. Following graduation in 2015, he completed a General Practice Residency at Truman Medical Center, learning advanced techniques in restorative, endodontics, oral surgery, and other areas of dentistry. He has volunteered his time at both local and international missions including Kansas Mission of Mercy, Missouri Mission of Mercy, Give Kids a Smile, Team Smile, and several mission trips to serve the deaf population in Zambia, Africa.

Dr. Clark on how he came to Dental Arts: "I first met Dr. Elias during my first year in dental school. I traveled with him to Africa on mission trips during my second and fourth years in dental school, and I have worked with him at events throughout Kansas City as well. Seeing the amount of time, energy, and love Dr. Elias put into his career and into the people he served inspired me and gave me the drive to make missions a fundamental part of my career. In the time since those trips, I have gotten to know Dr. Opdahl and Dr. Bowen, and the rest of the Dental Arts team, and I've seen that their philosophy of helping others extends not only to mission trips, but to their local community and to their daily practice as well."

“Though I am always nervous, I know that no matter what the situation, I could not be in better hands at Dental Arts. Thank you to you and your staff. You are all so wonderful. God bless you!” Gail